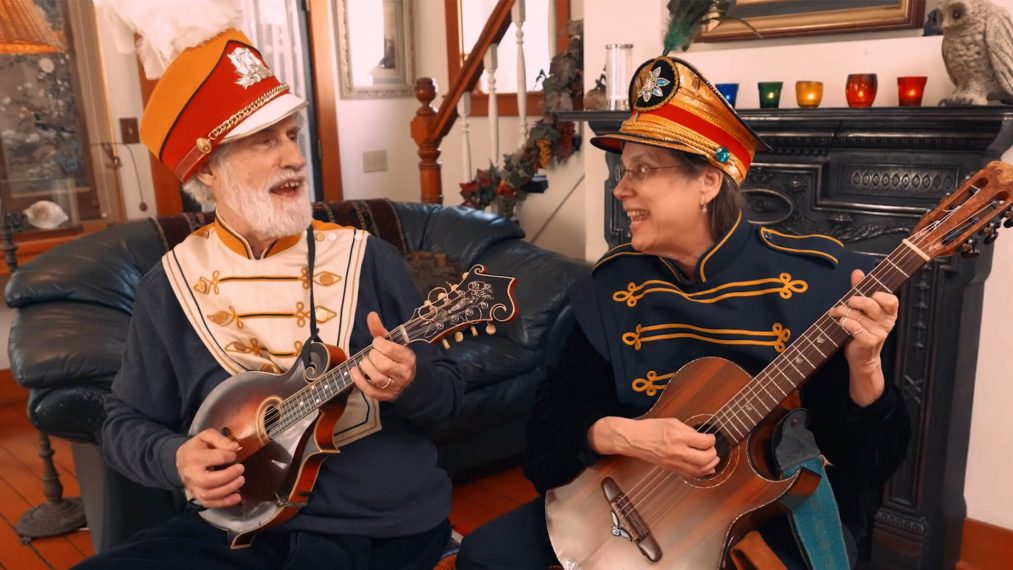 Fl!p Breskin co-founded the Puget Sound Guitar Workshop in 1974 and has been sharing songs and teaching guitar for over half a century. Her song One Heart At A Time was chosen for the sequel to the Rise Up Singing songbook.  Zeke Hoskin writes warped songs that other musicians love to sing and record. His well-known songs include Hunting The Duck, a spoof on hunting trips, and Valparaiso in a Rowboat about whiskey smuggling during American Prohibition which is widely sung by sea chantey singers.
Margaret Bikman,an Arts & Entertainment Editor Emeritus of the Bellingham Herald has said of Fl!p and Zeke:
“Singing is about community, and it’s rare that a couple has humor, humbleness, and a real sense of what’s important in this world to teach and lead others in song. As they often tell their audiences, “if you know the song, sing along. If you don’t, sing anyway.”
They embody what they call “living room music.” It’s not the “show-off” tunes, but the songs that are quiet, sometimes, that make us think about what’s important –family, home, getting along, kindness, and giving back. And sometimes the songs are so delightfully wacky that we learn to laugh in a time when life is not always so funny.
Flip and Zeke are jewels in a town that’s full of talented musicians. But they make us smile, they make us weep, they make us shout for joy. We see ourselves more clearly though the songs they sing.”